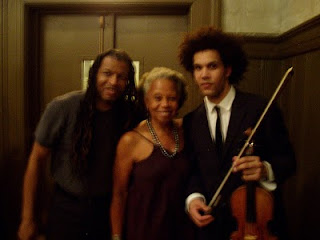 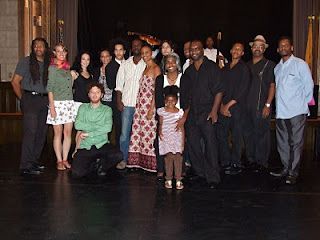 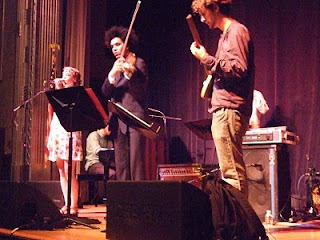 Last Friday, August 27, was one of those “You should have been there” evenings. There was Trenton, NJ. Not a place I especially associate with extraordinary violinists or out-of-this-world modern dance. Just goes to show how wrong some assumptions can be.

The occasion was a fundraising held in the War Memorial/Patriots Theater, an architecturally stately building that surely has its own story to tell. On this night, a ballroom full of peaceful patriots turned out to give financial and moral support to The Conservancy (NJ). The Conservancy (NJ)is both a place and a dream. It is becoming a center where young people and artists come together for learning and teaching. Think of art in the broadest sense of the word and you’ll be in tune with Sterick and Jacqui Ivey. They are the driving force in resurrecting the historic Trenton Conservatory of Music--where young Jacqui Ivey took piano lessons-- as The Conservancy (NJ). They envision a place where children engage in all sorts of artistic expressions from cooking to drumming. "There’s a lot of talent in Trenton” she says. Given the current cutbacks in public school art programs, Jacqui Ivey feels the need is urgent, and she is determined to nourish young talent while promoting local artists and arts events in the process.

The benefit performances were stunning, with The Wesley Drears Duo, Dancespora and the Scott Tixier Group taking turns on stage. Scott, just 24 yrs old, is an amazing jazz violinist (with a ‘fro that won’t quit). A native of France who now calls Brooklyn home, Tixier is winning kudos within New York’s jazz musician community.
His energy and virtuosity got me thinking about the late Noel Pointer,the brilliant jazz violinist,record producer and social activist who I admired and once interviewed. Pointer, also a Brooklynite, died of a stroke in '94 just before he would have turned 40. As an activist, he led fellow artists in raising public awareness around the controversial dismantling of the African Burial Grounds in lower Manhattan. His legacy also includes a foundation and a music school. Empowering Children One Note At A Time was the mission of Noel Pointer. I am inspired and feel the thread of our human connectedness when I see people like Scott Tixier and Eric Thomas, a Trenton elementary school teacher,---and others--joining with the Iveys in that same spirit and commitment.Check out the web info on Scott Tixier and Noel Pointer. And learn more about the Iveys work: www.theconservatorynj.com
href="http://www.theconservatorynj.com/">http://www.theconservatorynj.com/) .

Making Waves and Riding the Currents
When was the last time you heard a public official talk out loud about trying to make a living while also trying to feel that their work had meaning?

In his foreword to "Making Waves and Riding The Currents," Robert Reich, former Labor Secretary in the Clinton administration addresses this struggle. The foreword is reason enough to check out this book. Just as it should, Reich's foreword proves to be a perfect set up for author Charles Halpern's story.

A Yale trained lawyer, Halpern strayed from the prestigious law firm path and, with a small band of like-minded colleagues, stepped onto the uncommon road of social entrepreneur. Together, they created the nation's first public interest law firm (Center for Law and Social Policy) and one of the firt public interest law schools (City University of New York Law School).

We often take for granted some things that didn't exist until someone saw a need and invented them. A branch of law practice devoted to public service and social policy is such a thing. It's practitioners take on defense of the environment, challenges to irresponsible corporate behavior and mis-treatment of the mentally ill, among other issues.

I was moved by Halpern's commitment ---not just to this kind of law practice, but also by his thoughtful reflections on wisdom as a practice. It helps that he carefully distinguishes between being smart---that is well educated---and being wise. Wisdom, he writes, entails being grounded, reflective, insightful and compassionate.

Cultivating these qualities as a way of being, he says, is possible for all of us and will make us wiser.

Sad to say, I neglected reading it then. But recently I spotted a copy in the most unlikely spot: on a featured reading display in the public library of Easton, PA. Not exactly the kind of place I would have thought amenable to featuring the writings of a Geechee girl! So much for my stereotyped thinking.

"Vibration Cooking"could just as easily have been titled, "The Audacity of a Self-Confident, Adventurous, Rule-Breaking Black Female When Writing a Predictable Recipe Book is Not Enuf."The book cover gives a clue.

Part travelogue, part cookbook, part memoir, "Vibration Cooking" is outrageous in its total disregard of the proper etiquette for cookbook writing. So, don't look for many precise measurements, orderly listings of ingredients, cooking temperatures or other familiar directions. With Verta Mae, you are mostly on your own if you have a taste for bar-b-qued gator tails or lamb loaf, though most dishes do have just enough how-to instructions.

Recipes aside, this book is fun reading. And it's liberating, if you're game and willing to trust your own vibe. After all, according to Verta Mae, who obviously set out to demolish the mystique surrounding the culinary arts, "Food is food. Everybody eats."

Outliers
"Outliers: The Story of Success" is the third fascinating book by Malcolm Gladwell. "Tipping Point" and "Blink" were his earlier ones.

"Outliers" opens with the story of Italian immigrants who come to the United States from Roseto Valfortore in 1882, eventually settle in eastern Pennsylvania and name their new place Roseto after their hometown in the old country.

I happened to have canvassed in Roseto last year for then-candidate Barack Obama in the run up to the general election. And believe me, Obama was a hard-sell in this close-knit community of Italian Catholics. More so, I thought, because when Rosetans answered my knock at their door, I would be there, me, a black woman trying to persuade them to vote for "the black guy", as Obama was often described to me.

Anyhow, in the opening of "Öutliers", Gladwell tells how Rosetans astonished medical researchers when a study found them to have an unusually low incidence of heart disease among their elderly. This in the 1950's when heart attacks were a leading cause of death among older Americans, men especially.

How could this be? Researchers had no answers. It wasn''t diet, or exercise, or genes, or anything they could put their fingers on. Roseto was an outlier, a place that lay outside the usual experience.

In"Öutliers," Gladwell reveals other instances where success, under close examination, can be attributed to factors often overlooked when we simply rely on conventional wisdom. One example is the birth years shared by certain groups of successful people.

There were times, while reading this book, that I had to put it down. I was so filled with food for thought, that I needed time to savor and digest it. It's that kind of book. It will make you think about how we think about success...and more.

You may not think that the world needs you, but it does.

For you are unique, like no one that has ever been before, or may come after.

No one can speak with your voice, say your piece, smile your smile or shine your light.

No one can take your place, for it is yours alone to fill.

If you are not there to shine your light, who knows how many travelers will lose their way as they try to pass by your empty place in the darkness.

~Inspired by an old poem